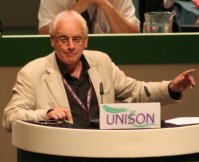 It is with great sadness that we announce the death of John Stevenson, a committed trade unionist, socialist, musician, magician (a real one), lover of train sets, hater of injustice, part owner of Hearts FC, for many years the central figure in UNISON Scotland’s communications and campaigns committee, and former president of City of Edinburgh UNISON branch.

(This first paragraph is a tad over the word count. It’s a joke, for John)

Originally a telecoms engineer, John retrained as a social worker. He became active in NALGO and on the formation of UNISON became a central figure in UNISON’s City of Edinburgh Branch where he finished his long shift as branch president.

In a crowded field, perhaps John’s biggest contribution to UNISON was the integrity he brought to UNISON’s campaigning and communications.

For thirty years, John edited ‘Scotland in UNISON’ the union’s newspaper. He was fiercely proud that it was lay edited and produced, to a highly professional standard. There were suspicions he was still editing it in retirement, from his hospital bed.

Generations of trade unionists were trained by John, learning how to put UNISON’s message across. He always supported activists coming through.

John put boundless energy and intellectual curiosity to work for the union and the wider labour movement. John was an innovator, he believed unions should use every modern technique to improve the lives of ordinary working people. He took UNISON into the digital age. UNISON Scotland’s website (this website!) was John’s baby. He wrote blogs. He pioneered UNISON’s social media. His work grew and developed giving UNISON Scotland a presence – putting professionally sustained efforts of other unions into the shade.

Retirement brought a change of focus. John wrote regularly on contemporary issues for the Morning Star and to no one’s surprise this committed internationalist took on a role as a trustee of the Scottish Nelson Mandela memorial. For whom he was still writing material, just a few weeks ago from his hospital bed.

When John recently made it public that his health wouldn’t be getting better he did so with typically self-deprecating wit: “Much gratitude for the NHS community and hospital staff, from cleaner to consultant, who have been brilliant (apart from the patronising one who assumed ‘old people’ had resigned the right be spoken to as an adult – or maybe she just didn’t like my jokes). For me, the best staff one-liner was when I greeted one regular clinician with: “How are you today?” to get the reply: “Better than you I suspect.”

As a student John played professionally in bands – between sets he performed conjuring tricks – he was accepted into the Magic Circle. As able to deliver a speech at a Burn’s supper as a conference, for fun John liked to read German poets, in German.

More controversially perhaps he was proud to be a co-owner of Hearts football club – on account of him buying a few shares.

Close family friend and fellow trade unionist Jane Carolan said on his retirement: ‘John was a breakfast connoisseur with a comprehensive knowledge of greasy spoon cafes the length of the UK. A raconteur, who could delight audiences with tales of a very varied working life and reduce individuals to such fits of giggles that meetings have been disrupted. John has always maintained a sense of discipline in his politics, prepared to have his say and abide by the decision of the majority.’

From posts of his model railway to his wise words on socialism. We will all miss him dreadfully.

UNISON’s hearts to go out to his wife Morag, and his children Seonaid and Robbie.