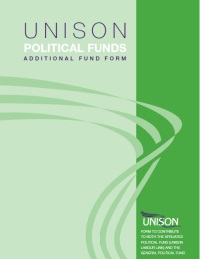 The Campaign Fund (previously the GPF) is used for general campaigning. The best way to define this is to list the kind of campaigns that the union could not have mounted without a political fund. (See the UK GPF site for more details, forms etc)

– promoting and defending public services through Scotland’s Public Works campaign
– lobbying and campaigning against outsourcing and privatisation, including the victory in Edinburgh
– campaigning for fairer pay through the Worth It campaign
– fighting racism and discrimination, including our successful fight against the BNP
– defending pensions
– improving employment rights, including paid holidays, rights for agency workers – and building support to stamp out zero hours contract abuses
– getting legislation for more equality including through public sector equalities duties
– extending coverage of the Scottish Living Wage and getting this issue up the political agenda in the Scottish Parliament and in public sector agencies and the Third Sector.
– UNISON Scotland support for the People’s Assembly and we have contributed to a new campaigning guide issued by the People’s Assembly Against Austerity Scotland.

UNISON Scotland responses to consultations conducted by the Scottish Parliament are in part resourced from the Political Fund. You can see them here.

But it’s not just the big things the Campaign Fund supports. All sorts of national and local projects and campaigns benefit from receiving funding this way, such as anti-cuts campaigns or local campaigns against hospital closures for example.

If your branch has members in it who pay into the Campaign Fund, the branch can apply for financial support for a political campaign or activity.