The Lobbying (Scotland) Act 2016 establishes a Lobbying Register which will allow members of the public to view information submitted by organisations like UNISON who carry out certain types of lobbying. The Act comes into force in April 2018.

This paper sets out the internal procedures UNISON staff and certain lay activists must follow in relation to activities covered by the Act.

What lobbying is covered

Regulated lobbying covered by the Act includes face-face-face contact (including video conferences) with MSPs; Scottish Government Ministers; Special Advisors; and the Scottish Government’s Permanent Secretary (not civil servants generally). The lobbying must be in relation to government or parliamentary functions, when the contact is being used to inform or influence decisions on behalf of UNISON.

The Five Steps flowchart in Annex A of the document is a useful process guide. 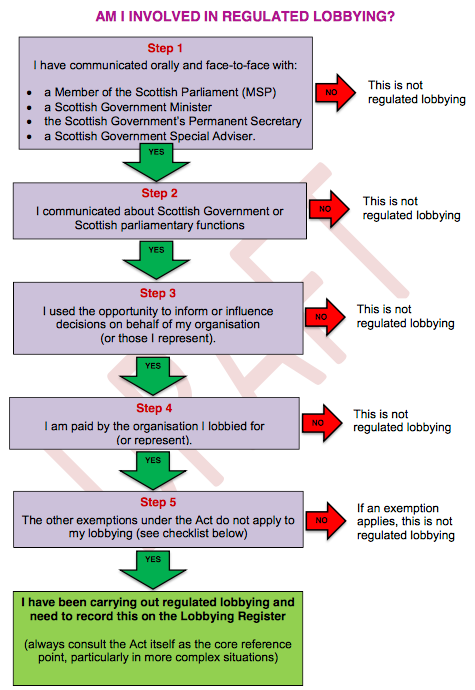 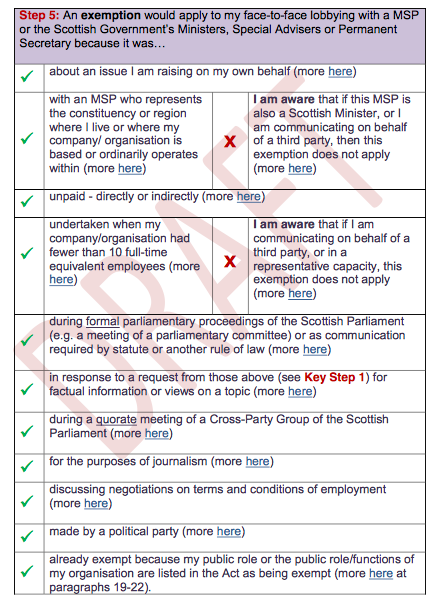 The key points to remember include:

Typical examples of a lobbying event would be:

UNISON Scotland is covered by the Act and will have to submit an information return for every individual lobbying activity covered by the Act, initially within 30 days of the first occurrence and afterwards at the end of each six month period after we first engaged in regulated lobbying.

The Nominated Person for UNISON Scotland is; Dave Watson, Head of Policy and Public Affairs. He will be responsible for making the information returns.

Any paid member of staff or lay activist in receipt of payment (including honoraria) must complete the internal form in Annexe B of the document and return it to Joy Graham (j.graham@unison.co.uk) in the Bargaining and Campaigns Team as soon as possible after the lobbying activity took place. Copies of the form can also be found on the Bargaining and Campaigns Sharepoint page.

The information required includes the role and name of the person lobbied and the location. It includes a brief description of the meeting and the purpose of the lobbying i.e. what was it seeking to achieve. The information must be accurate, relevant and understandable. Those searching the Lobbying Register are interested to see and understand who we have lobbied, the purpose of that lobbying and where and when it took place.

This is an important piece of legislation, which UNISON Scotland supported. The intention is not to hinder or discourage lobbying, but rather to improve transparency. None the less, the procedures must be followed carefully. Compliance can be enforced initially by means of an Information Notice, followed by formal censure. Both of these risks reputational damage to UNISON. As a last resort, criminal prosecution is available including fines and imprisonment.

If in any doubt seek advice from Dave Watson: d.watson@unison.co.uk