You will be asked to vote online, with a link. This has been emailed to you. Please check your email. 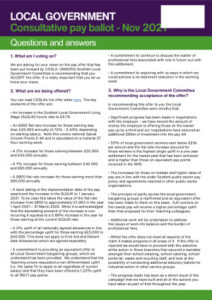 Your pay, your say – Vote to ACCEPT now

You can read the employer’s offer letter here.   They key elements of the offer are:

In recommending this offer to you the Local Government Committee were mindful that:

The progress made has been as a direct result of the campaign that we have built and all of the actions you have taken as part of that throughout the year.

The ballot is open until midday on 29th November so please vote before then!