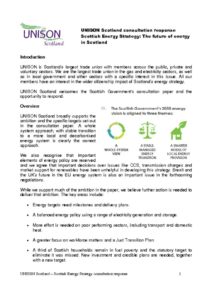 UNISON Scotland broadly supports the ambition and the specific targets set out in the consultation paper. A whole system approach, with stable transition to a more local and decarbonised energy system is clearly the correct approach.

We also recognise that important elements of energy policy are reserved and we agree that important decisions over issues like CCS, transmission charges and market support for renewables have been unhelpful in developing this strategy. Brexit and the UK’s future in the EU energy system is also an important issue in the forthcoming negotiations.

While we support much of the ambition in the paper, we believe further action is needed to deliver that ambition. The key areas include:

A balanced energy policy using a range of electricity generation and storage.

More effort is needed on poor performing sectors, including transport and domestic heat.

A greater focus on workforce matters and a Just Transition Plan.

A third of Scottish households remain in fuel poverty and the statutory target to eliminate it was missed. New investment and credible plans are needed, together with a new target.

If local government is pivotal to the development of a more decentralised energy system then it has to receive proper funding.

Renewable energy developments in Scotland have been dominated by the big energy companies, developers and large landowners. The community ownership targets are very modest and require new public sector entrants to the market, primarily local authorities.

The creation of a government owned energy company is just one step towards the extension of public ownership throughout the system. This should include co-operatives and municipal energy companies.

Current energy policy outcomes produce massive inequalities. Wealthy elites (corporate CEOs, large landowners) are reaping large dividends whilst fuel poverty blights a third of households. This energy strategy has much to commend it technically. What it needs is a new focus on social justice.