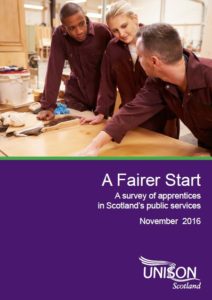 This survey is part of UNISON Scotland’s damage series which looks at the impact of austerity cuts on the country’s public services and the people who deliver them.

The survey reveals a group of workers who are plagued by job insecurity. The track record of employers providing employment for apprenticeship schemes is patchy but generally poor. While a small number of employers had a near 100 per cent record of transferring employees to permanent contracts – the NHS scores highly here – figures of 30% or less are much more common.

Job insecurity is a major issue for apprentices and has left swathes of young men and women facing an uncertain future. While there are examples of good practice among employers offering permanent employment upon completion of apprenticeships, generally the track record is very poor. Apart from the obvious unfairness to the trainees, it represents a very poor use of resources. Apprentices play a vital role in delivering public services and it is vital that we invest in them.