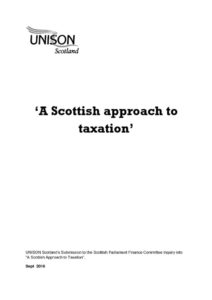 UNISON is the largest trade union in Scottish public services. Our members deliver services, pay taxes and also have a wider citizenship interest in how services are provided and paid for. We therefore welcome the opportunity to submit evidence to the Scottish Parliament Finance Committee Inquiry into   A Scottish approach to taxation

What Scotland needs is a tax system which will adequately fund public services and other Government expenditure and reduce inequality.   It is possible to have a society much lower levels of tax than we currently have – and it is possible to have a much fairer society than we currently have. It is however not possible to have both at the same time.  One of the components  of a Scottish   Approach to Taxation should be Government at all levels making it clear that taxes are not an add on to civilised country but an essential component,  a civic duty as well as a legal necessity.

With the Scottish Parliament raising around half of its own revenues there is scope for a considerably different approach to that of the rest of the UK. There has however been little sign of political will to do this so far and nor can it be said that difference for its own sake will make for improvement.  A Specifically Scottish approach will be of value to the extent that it means higher pay, investment in large infrastructure projects, belief in the public sector, and better opportunities for skills development and education.

The principles aimed at by the Scottish Government of proportionality, certainty, convenience and efficiency all begin with the fundamental principle  that the tax must be collected. This will obviously be assisted if the system is as simple as possible with the highest amount of transparency and the fewest possible loopholes.  It is important to remember that in constructing a progressive tax system not every element of that system needs to be progressive – merely that overall, those on higher incomes should pay more.  Accompanying this however must be a determination that all of the tax due will be collected.

Ensuring that all tax is collected is not simply a matter of mechanisms but also of creating an environment whereby tax is an expected part of life and business. The Scottish Government’s tax avoidance measure used by Revenue Scotland is better than the UK approach and we welcome this.  However there is a great deal of scope for greater action. One way of helping to build this necessary environment would be the rigorous exclusion of companies who use aggressive tax  avoidance measures from all public procurement.  The Scottish Government can take mandatory, rather than discretionary action to prevent companies that have not met their tax obligations from gaining public contracts. We would argue that only companies who have shown a commitment to meet their social responsibilities, by signing up to the Fair Tax Mark http://www.fairtaxmark.net/ or similar should qualify for contracts. Companies should be able to demonstrate they are operating within both the letter and spirit of the law at all times without use of artificial tax avoidance schemes or tax havens to reduce  tax liabilities.

In order to ensure that we all pay a fair proportion, all forms of wealth need to be taxed. Currently the system taxes wages more highly than other forms of wealth leaving ordinary workers bearing an unfair burden.   A Scottish approach to taxation should take this into account.

Property is a significant form of wealth and must be taxed in order to reduce inequality. The well-off already own larger and more houses than the rest of us.  If this form of wealth is untaxed it becomes an even more attractive form of investment. This means that more people buy houses, not as a place to live but as an investment. This will add to our already dire housing shortages, increasing prices for both renters and ordinary buyers. Unlike wages properties can be passed on to relatives, further maintaining and increasing inequality for future generations.

The capacity of Local Government to raise and spend tax is an important part of the overall tax system.  Local authorities have their own democratic mandate but increasingly their ability to respond to local demands is hampered by their lack of control over the level of funding available to them. Local authorities need to be able to have the ability to control the levels of their own budgets. Currently about 85% of local authority funding is determined centrally.  This is neither efficient, proportionate  nor in fact does it provide certainty to the tax payer.

Local Government should primarily be funded by a local property tax.  This is the best fit for local government as it is clearly linked to the authority. It cannot be moved or hidden making it convenient to administer.  Ideally this would take the form of a replacement for the Council Tax based on an up to date (and regularly repeated) property revaluation.

Business rates should be returned to local authority control. Councils should be able to set their own business rates, this will allow them to raise money to pay for services and devise their own criteria to support the type of businesses they want to encourage.  Councils should also have  discretionary powers to introduce new taxes including a Tourist tax and a Land Value Tax on vacant, economically inactive land.

Local authorities are well placed to make decisions about local priorities because councillors are directly accountable to local people for the decisions they make. Central government funding should acknowledge this and funds should be minimally ring-fenced.