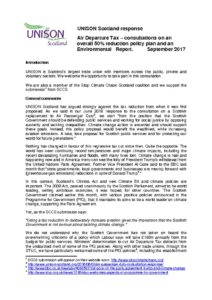 UNISON Scotland has argued strongly against this tax reduction from when it was first proposed. As we said in our June 2016 response to the consultation on a Scottish replacement to Air Passenger Duty, we start “from the position that the Scottish Government should be defending public services and working for social justice by opposing austerity and tackling inequalities.

“Climate change action is essential and should support these goals. Instead, this policy proposal would benefit the wealthiest, while increasing aviation emissions. A lose, lose proposal for Scottish public services and for protecting our world for future generations.”

Nothing has changed in favour of this regressive tax cut since then. Quite the opposite. The world has seen continuing record temperatures and major climate impacts, including the recent devastating hurricanes and floods, with many lives lost. Climate change is real and happening now and in America many can see the folly of President Trump’s withdrawal from the United Nations Paris Agreement. Former Vice President Al Gore said to the BBC last month that “state governments, local governments and businesses are moving forward with [greenhouse gas emissions] reductions in spite of Donald Trump.”

In this context, Scotland’s Climate Act and new Climate Bill and climate policies are important. The 2009 Act, passed unanimously by the Scottish Parliament, aimed to be world leading, setting ambitious examples, it was hoped, for other countries. The Scottish Government claimed earlier this month, with various positive policies announced in the Programme for Government (PfG), that it maintains its aims to be a world leader on climate change, supporting the Paris Agreement.

Yet, as the Stop Climate Chaos Scotland submission (which we support) says:

“Using a tax reduction to deliberately increase aviation gives the impression that the Scottish Government is not serious about tackling climate change.”