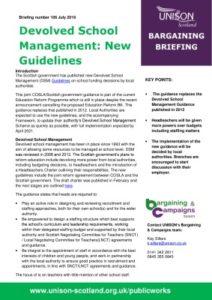 The Scottish government has published new Devolved School Management (DSM) Guidelines on school funding decisions by local authorities. This guidance replaces the DSM Guidance published in 2012. This sets out which decisions headteachers can make round staffing and budgets in their schools.  Despite cancelling the Education Reform Bill the Scottish government is continuing with its education reform plans. This includes giving more powers to headteachers. These involves more powers over budgets including staffing. The implementation of the new guidance will be decided by local authorities. UNISON represents a range of staff making up the team that delivers education in Scotland.  Branches are encouraged to start discussion with their employer as soon as possible to ensure that it is not only teachers’ unions who are involved in local decision making.