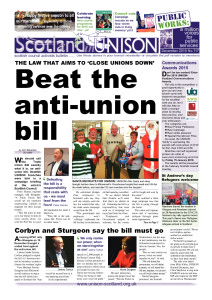 from Scotland in UNISON Dec 2015

We should call the Trade Union Bill exactly what it is, an antiunion bill, Scottish UNISON branches were told in a campaign briefing at the union’s Scottish Council.

“This bill aims to stop us in our tracks. It aims to close unions down. As with the Poll Tax we give the legislation the name it deserves.

“This bill is the Anti Trade Union Bill. There can be no other name.”

He welcomed pledges from employers in Scotland who say they will not comply with the law but warned that only the trade union campaign would beat the bill.

“The government and employers won’t ‘willingly’ implement the bill but they’re not that keen on their austerity cuts either. “If we shelter behind their rhetoric we’ll soon find that’s no shelter at all. Defeating the bill is a responsibility that rests with us. A campaign we must lead from the front. “Employers and Government support is welcome, but the victory will be fought and won by the union.”

Peter outlined a three stage campaign now that the bill is going through the Lords. The union will oppose, resist and if necessary mitigate through grass roots organisation.

Mass opposition has had a visible impact in the Commons and the union is now opposing by targeted lobbying of the Lords on a host of technical issues and maintaining the mass campaign and that must be carefully co-ordinated. It is essential that any contact with Lords is planned and coordinated through the national campaign via the Scottish Secretary.

The aim is still to defeat the bill but if it is enacted we will need to resist through negotiating now for commitments from employers to resist some or all of the measures in the bill. And if elements of the bill are enacted, branches will need to mitigate the effects through coordinated organising and recruiting on the ground.

As it stands the bill would stop subs deductions from wages, limit how unions can use their funds, interfere with facility time and set ballot thresholds that will effectively remove the right to strike.

from Scotland in UNISON Dec 2015