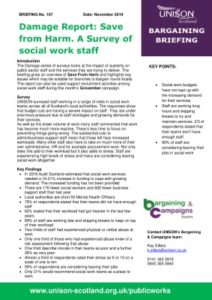 This briefing gives an overview of Save From Harm: a survey of social work staff.  The survey looks at the impact of austerity on social work teams. The report highlights key issues for local bargain. The report can also be used during this month’s Grovember campaign.

UNISON surveyed staff working in a range of roles in social work teams across all of Scotland’s local authorities. The responses show that budget cuts are having a severe impact on staff. They are under enormous pressure due to staff shortages and growing demands for their services.