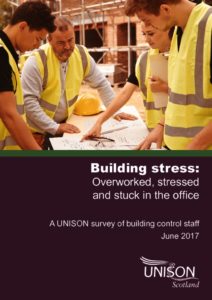 The report is the latest in the union’s Damage series which looks at the impact of austerity cuts on the country’s public services and the people who deliver them. The survey reveals a group of workers who are short-staffed, overworked, stressed and long overdue a pay rise.

The Building Standards service in Scotland is provided by local authorities. Their role is the processing of building warrants, therefore checking building design and construction. They are also required to ensure that dangerous buildings are made safe.

Key findings from the survey show:

Dave Watson, UNISON’s head of policy and public affairs, said: “This report reveals a dedicated workforce committed to ensuring that buildings meet the standards required but who are under enormous pressure. They feel exhausted, undervalued and are struggling to deal with the demands placed upon them.

“Salami-slicing of services avoids headlines but the long years of austerity are having a severe impact on our services and the staff trying to deliver them with limited resources. These are small teams where the loss of even one member has a substantial impact on the performance of the team and many of our members are faced with working unpaid hours just to get their work done.

“People with these qualifications are in demand and there are many opportunities for better paid work in the private sector. There is a real risk that without decent jobs and pay they will take up these opportunities.”

To supplement the information given by members we also placed a freedom of information request with all local authorities.