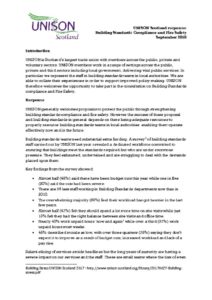 UNISON generally welcomes proposals to protect the public through strengthening building standards compliance and fire safety. The success of these proposal and building standards in general depends on there being adequate resources to properly resource building standards teams in local authorities to enable them operate effectively now and in the future.

Building standards teams need substantial extra funding. A survey of building standards staff carried out by UNISON last year revealed a dedicated workforce committed to ensuring that buildings meet the standards required but who are under enormous pressure. They feel exhausted, undervalued and are struggling to deal with the demands placed upon them.

Key findings from the survey showed:

These proposals offer some opportunities to better protect citizens through increased inspections and clearly defined roles but budget cuts and staff shortages will impact on the effectiveness of these changes. Increased funding is needed to deliver improvement.