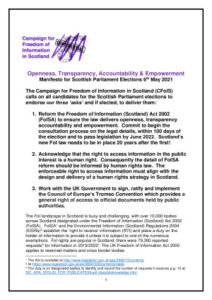 Robust freedom of information laws are essential to a democracy.

UNISON Scotland fully supports the manifesto for the 2021 Scottish Parliament elections launched today by the Campaign for Freedom of Information in Scotland.

The launch, on 21st April, comes exactly 46 months after MSPs at the Scottish Parliament agreed unanimously to begin the process of reforming the Freedom of Information (Scotland) Act 2002 (FOISA) but the matter remains outstanding.

The campaign has three ‘asks’ for candidates and calls for ‘Openness, Transparency, Accountability & Empowerment’. See details of the full CFoIS manifesto on their website www.cfois.scot and copied above.

We highlight in the UNISON Scotland manifesto that there should be a universal, statutory, enforceable right to information about all public services, regardless of what type of body delivers the service, public, private or third sector.

CFoIS says in their first ask that candidates should commit to begin the consultation process on the legal details of reform of FOISA, within 100 days of the election and to pass legislation by June 2022, arguing that Scotland’s new FOI law needs to be in place 20 years after the first!

We couldn’t agree more, having campaigned strongly for FOISA and since, as FOI rights were lost, for them to be restored to cover all public services. We urge candidates to give their support and, if elected, to deliver on it.