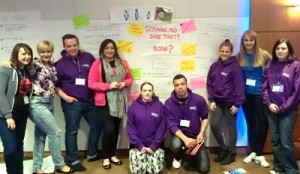 The Scottish Young Members Committee recently attended Nottingham for the National Young Members Weekend (NYMW) which everyone really enjoyed. We have come back feeling motivated and ready to begin hard work on our new campaign.

The last two previous years we came 1st at the NYMW for best campaign idea which was our housing campaign ‘Gies A Hoose’ and continued as ‘Gies A Hoose – Part 2’. This campaign was really successful and was a huge amount of work for the committee. We were also extremely proud to win the UNISON Scotland Communications Award 2014/15 for Best Campaign.

This year we came 2nd with the best campaign idea, which we were still extremely happy with and we agreed as a committee to take our campaign back to the Scotland region to begin some more hard work. This year we have agreed to run a campaign around work place bullying and giving our young members and others a better understanding around bullying within the work place and supports that are available. We have already given our campaign a true Scottish style name of ‘Gonnae No Dae That’.

We will be spending the next few months, creating various pieces of campaigning materials before launching our campaign.

To follow our work on the run up to the launch of our campaign please follow our Facebook Page – UNISON: Young Members in Scotland and Twitter – @UNISONScotYMs where we will be using the #uymgonnaeno