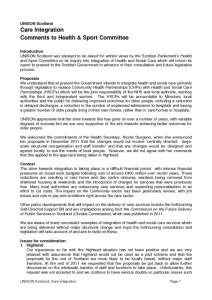 We understand that at present the Government intends to integrate health and social care primarily through legislation to replace Community Health Partnerships (CHPs) with Health and Social Care Partnerships (HSCPs) which will be the joint responsibility of the NHS and local authority, working with the third and independent sectors.  The HSCPs will be accountable to Ministers, local authorities and the public for delivering improved outcomes for older people, including a reduction in delayed discharges, a reduction in the number of unplanned admissions to hospitals and having a greater number of older people living in their own homes, rather than in care homes or hospitals.

UNISON appreciates that the drive towards this has gone on over a number of years, with variable degrees of success but we are very supportive of the aim towards achieving better outcomes for older people.

We welcomed the commitments of the Health Secretary, Nicola Sturgeon, when she announced her proposals in December 2011 that the changes would not involve „centrally directed,  largescale structural reorganisation and staff transfer‟ and that any changes would be „designed and agreed locally‟ to suit the needs of local people.  However, we did not agree with her comments that this applied to the approach being taken in Highland. ..