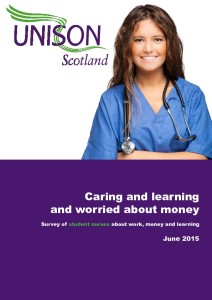 Caring and learning and worried about money
Survey of student nurses about work, money and learning – June 2015

The present system of funding student Nurses is clearly unfit for purpose. We sought the views of Nursing Students as to how they thought the system could be improved.

When a rate a range of models of how the system of Student Nurse funding could be improved the overwhelming majority (76%) said that their preferred option would be a bursary paid at a level students could live on.

That students on placement are almost never supernumerary was a point made frequently, and often sharply. This suggests that rather than being a Student in the workplace to learn, Student Nurses and Midwives are being put to work without pay!

The next most popular option is the retention of the Bursary scheme but allow nursing Students access to the student loans system.

It is clear from this survey that the system of funding Nursing Students is unfit for purpose.
Scotland Student Nurses and Midwives, many of whom have families of their own are living in poverty.

The current level of bursary does not provide them with sufficient funds to live on and leaves many in a financial state which is both inadequate and stressful.

Living in poverty will not impact on levels of indebtedness, but will have a direct affect on the students ability to study, learn, retain knowledge and skills and of course will have an impact on their own children in those circumstances where the Student Nurse or Midwife is a parent.
Moreover they feel, rightly, that the contribution they make whilst on placement is not being recognised.

Whist UNISON welcomes the Scottish Government commitment to review Student Nurse and Midwife funding. We are concerned that the proposals which are being discussed will do nothing in the short term and we therefore call on the Scottish Government to increase Student Nurse and Midwifery Bursaries to a level which is consistent with a Living Bursary.

UNISON believes that entire system of financial support for Student Nurses and Midwives needs an urgent review – one which is based on a fundamental principle of fairness; which delivers a long lasting commitment to a Living Bursary and is unafraid of committing public money to doing so.