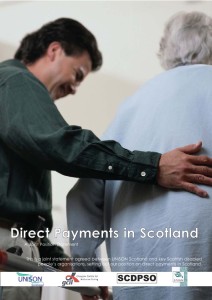 UNISON, Scotland’s public service union, announced on 1 May 2007 that it has agreed with a number of key Scottish disabled people’s organisations, a joint statement setting out its position on direct payments in Scotland.

The union, which organises social care staff across the local authority, health care and voluntary sector, has agreed with the Glasgow Centre for Inclusive Living(GCIL), the Lothian Centre for Independent Living (LCIL), the Scottish Personal Assistant Employers Network (SPAEN) and the Scottish Consortium of Direct Payments Support Organisations (SCDPSO)

Stephen Smellie, Chair of UNISONScotland’s Social Work Issues Group speaking at the launch at the GCIL said: “This agreement has been introduced because there have, in the past, been misunderstandings between UNISON and disabled people’s organisations on our respective positions on Direct Payments.

“We are also agreeing to promote trade union membership amongst those staff employed via Direct Payments, and to sit down with the employers groups and draw up good practice terms and conditions for people employed through direct payments.”

The organisations also promise to campaign for increased levels of funding from the Scottish Executive for independent living support. And for that support to be high enough to cover decent pay, training, holidays and pensions.

Etienne d’Aboville of the GCIL said “This clearly states our agreement that direct payments are an important option for disabled people, enabling them to purchase services directly and to support independent living.”

Peter Brawley of the Scottish Personal Assistant Employers Network said “These payments are often vital for the person concerned but they are not a substitute for other public services, and are currently set too low to cover the full cost of employing staff at a decent level of pay, training and holidays. We will join with UNISON in arguing for more realistic payments”