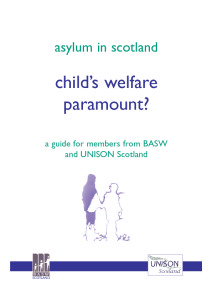 Ten years on from UNISON Scotland and BASW Scotland’s  first ever guide for social workers on ethical working with asylum seeker children, Child’s Welfare Paramount? a national conference on Social Work with Refugees and Asylum Seekers has again highlighted the important role of social work in supporting refugee children.

Organised by BASW (the British Association of Social Workers), SWAN (Social Work Action Network) and UNISON, the authors of the guide, John Stevenson and Kate Ramsden both attended the conference.

John said, “The overall message from the day was the need for social work and social workers to see ourselves and act as a force for social change, by actively involving ourselves in not only supporting refugee children but also in speaking up and acting for all children affected by government actions – and that includes promoting children’s rights on issues like, poverty, housing, education and opportunities to fulfil their potential.”

The conference heard the “real voices” of refugee children – powerful and often harrowing accounts of their experiences coming to this country whether long and tortuous journeys through many countries with little protection or having been trafficked and then sexually and physically abused and exploited.

Kate said, “Scant regard is still paid to children’s rights under the UN convention. They go through terrible experiences on their journey then when they reach the UK they are subjected to inaccurate and humiliating age assessments.

“They still do not routinely get the understanding and support they need for the hideous traumas they have endured. They still face being sent back to the horrors they escaped when they become 18.”

Lord Alf Dubs, veteran Labour politician, who came to Britain at 6 years old as part of the ‘Kindertransport’ to save Jewish children from the Nazis between 1938 and 1940 gave an inspiring presentation calling on the UK to give the current child refugees the opportunity he was given when he arrived here at 6 years old fleeing war and persecution.

Speakers from the Migrant & Refugee Children’s Legal Unit (MiCLU) and Coram reminded us that refugee children are children first, and it is the role of social work to hold their best interests as paramount. They stressed the important role for social workers to work alongside lawyers representing children in immigration cases to ensure there is a good assessment of the trauma and psychological effects on these children that can be used to assist in their immigration claims.

Social Workers Without Borders (SWWB) is an open project in its early days, set up by social workers returning from the refugee camps in Greece and France or in relevant services in the UK. They are looking for people to sign up to SWWB and we would encourage all our social work members to find out more. https://www.socialworkerswithoutborders.org/

John said, “It was encouraging that over 300 people attended this event especially at a time when the right wing press try to present a picture that everyone is against refugees.

“However, it was disappointing to hear that almost all of the issues in our 2006 booklet for refugee children still remained challenges 10 years later.”