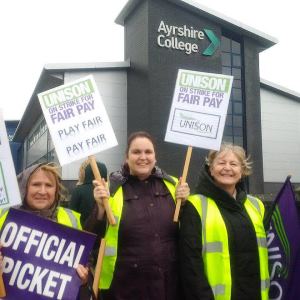 Further education members in Scotland have won an improved pay rise after a sustained campaign including industrial action.

This follows a months-long campaign, including strike days and action short of a strike, which culminated in a negotiating meeting on 8 December at which the employers’ association, Colleges Scotland, accepted that staff deserved the same flat-rate increase as their lecturer colleagues.

The support staff had rejected the employers’ first offer of £230 a year – just over half the £450 awarded to teaching staff.

The agreement reached also includes consolidation of a previous £100 payment from April 2017. That will bring the total increase for the 2016-17 pay round to £550 for all further education employees in Scotland.

“We are delighted that the employers have finally negotiated a pay offer that is fair for all hard-working college employees,” he added.

Following two days of strike action in September,talks at ACAS, then directly with the employers on 7 December had seen no resolution after two days of strike and on 22 November members voted by 89% to 11% in a ballot to reject the most recent offer.

Shirley Sephton, vice chair of UNISON Scotland’s education committee said: “This strike has always been about equality of pay and terms and conditions. “The employers’ last offer rewarded the high earners and not the lower-paid support staff – the majority of whom would receive no more than the previous offer.”

Chris Greenshields, chair of UNISON Scotland’s FE committee said: “Support staff are the backbone of Scotland’s colleges and don’t deserve to be treated as second-class citizens.”