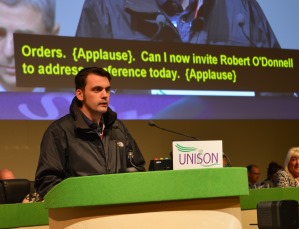 Conference then unanimously passed a motion calling for Glasgow City Council leadership to urgently meet with UNISON Glasgow City Branch officials to pro-actively discuss the situation at the SECC with a view to granting SECC full statutory trade union recognition and collective bargaining rights to UNISON and their members.

Earlier in the week the President issued this statement: 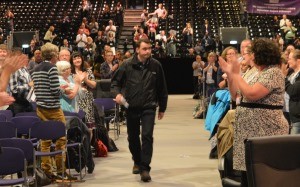 Robert is a gardener for the SECC. He was dismissed on 25 May 2015. UNISON represented him at an internal appeal on 10 June. The decision to uphold the dismissal of Robert O’Donnell for gross misconduct was confirmed on 12 June.

Conference, we are fully aware of the issues regarding Robert O’Donnell and I wish to reassure you that we are providing full support through the regional office and the branch.

We are also aware that there may be issues regarding the attitude of the SECC management company towards the recognition of trade unions. Steps are being taken to clarify that position.

If it transpires that the management of SECC are anti trade union then we will use all of our influence with Glasgow City Council to change that policy.

If, following any intervention with the Council the policy of the SECC towards trade unions continues to be unacceptable then regrettably the SECC will have to be removed from the list of approved Conference venues.

We will also take up the matter with the TUC and STUC as well as other Trade Unions to encourage them to support our position.