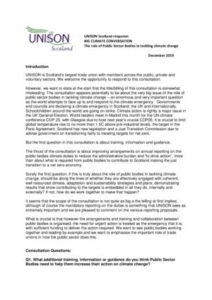 This is the UNISON Scotland response to the Scottish Government’s consultation on  the role of Public Sector Bodies in tackling climate change.

UNISON is very concerned that the austerity funding cuts which have hit public bodies so hard over the last decade have impacted work to date on tackling climate change and ensuring it receives the priority necessary. Local government has taken the brunt of the cuts, but NHS services are clearly also under severe strain.

Given the scale and urgency of the climate emergency, the funding of public services is an absolutely crucial aspect of the role of public bodies in securing a just transition to a net zero Scotland.

We need government at all levels to ensure sufficient funding for the magnitude of the climate emergency.

What is crucial is that however the arrangements and training and collaboration between public bodies is organised, the need for urgent action is treated as the emergency that it is, with sufficient funding to deliver the action required. We want to see public bodies working together and leading by example and we want to emphasise the important role of trade unions in how the public sector does this.