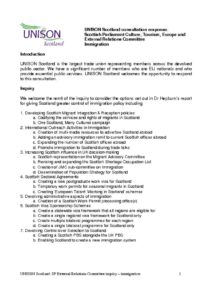 The Scottish Parliament’s External Relations Committee is holing an inquiry into the devolution of immigration powers after EU exit. They have commissioned a report from Dr Eve Hepburn that sets out a range of options for strengthening control in Scotland over immigration.

Any immigration system after EU exit has to recognise Scotland’s particular demographic needs. UNISON Scotland has long argued that this requires greater devolution of powers to Scotland over immigration, recognising that these will always have some limitations without undesirable hard borders.

In this submission we broadly support the options set out in the Hepburn report. While the soft and mid-range levers can contribute to better outcomes, we believe that hard-range levers will also need to be adopted given the demographic challenges facing Scotland. Some of these actions can be achieved using existing devolved powers, but others require a more positive and co-operative approach from the UK government.