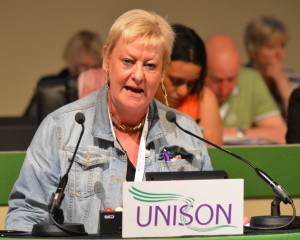 The fast moving debate around devolution across the UK was high on the Conference agenda this year, with two motions and a lunchtime fringe.

Over 200 delegates packed the joint region fringe meeting on the topic on Wednesday, which looked at the different models for public services in the devolved administrations and the proposed city partnerships in England, and the implications for UNISON and the trade unions.

Later that afternoon Scotland’s Jane Carolan on behalf of the NEC, highlighted the need for UNISON to revisit its devolution protocol – a call supported by the conference.

“UNISON’s internal debate on devolution started after the setting up of the Scottish parliament, the Welsh assembly, the Northern Ireland assembly and more latterly the London assembly and mayor,” said Jane.

“Prior to those institutions being set up our members in these nations participated in the civil society movements pushing for change, and played a crucial role in the development of the proposals that brought those institutions into being, seeing these as a vital element that bridged a democracy gap between UK institutions and the nations within the UK.”

She reminded us that our support for the new institutions was overwhelming but required a rule change “allowing the union to reflect difference in policy bargaining and communications across the nations and regions – as well as facilitating learning from the experience.”

“That was fine in 2004,” said Jane “But in a phrase from the original report, devolution is an event not a process.

“In 2015 that process has moved on considerably. Powers for the Scottish parliament have already changed and will do so again with the enactment of the Smith Commission, and the Wales Act 2014 changes the nature of the assembly.”

Jane added that in the meantime, the political landscape itself has changed considerably. 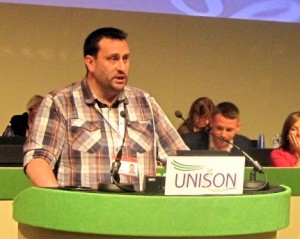 “So the time is right to review our processes – our approach to policy, to bargaining, to campaigning and to our communications and the resources that go with them”, said Jane, promising that this will be an NEC priority in the forthcoming year, changing our working practice to better reflect the world we live in.