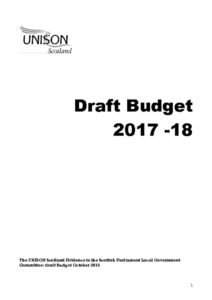 It is very difficult to respond to calls for evidence on a budget when there is so little information available. Our comments are therefore based on the Scottish government’s statements and published programme for government and members’ experience of recent local government budget cuts.

Public expenditure in Scotland faces year-on-year real term reductions, despite recent comments made by the UK Chancellor of the Exchequer stating that the end of deficit reduction targets we do not expect that there will be any substantial increases in public sector funding and therefore consequent increase in the block grant. Fortunately, going forward the Scottish government will no longer be tied to funding levels set via the Barnett formula, with around 40% of devolved expenditure funded via Scottish taxes. UNISON is calling on the Scottish government to use its powers to increase funding for local government.

UNISON has produced a range of reports in our ‘Damage’ series, which show that cuts are already impacting on the quality of services. While redundancy has been voluntary, work doesn’t disappear and the remaining staff have had to take on extra work while services are salami sliced. This is no longer sustainable: Service levels and quality cannot be maintained without adequate funding.

The Christie Commission highlighted the need for public sector reform to be both bottom-up and to focus on prevention rather than cure. “Preventative spend” means that people avoid problems rather than treating them down road. This is how we will make savings on budgets like health, police, criminal justice and social work. Local government is the key delivery body for preventative services. Services like refuse collection, street cleaning, and environmental health directly ensure that we avoid ill health by removing the sources of disease from our communities sports facilities, parks, and allotments offer free or inexpensive routes for people to keep fit, active and healthy no matter their age or ability.

Local government also delivers direct health and care services. Housing is also a key health service. A decent safe secure affordable home is vital to both mental and physical health. Education one of the highest profile local government services. As well as teaching the subjects children need to pass exams and get jobs, schools deliver a range of health and relationships education. Schools are also the gateway to a range of other agencies which can support families like educational psychologists and social workers. Investing in local government is the best way to ensure we move to preventative spending and realise the promised long-term savings. This is about more than financial savings – lack of investment in preventative spending are ruining lives.

The Scottish Government has set a target for ‘affordable’ housing of 50,000 over the next five years. However this figure falls short of the number required, estimated to be at least 60,000 in the same period. The figure of 50,000 also includes housing which is arguably not ‘affordable’ and this would take funding out of the Housing Supply Budget to provide subsidy in the private market which has failed to meet housing need in recent decades. UNISON Scotland would argue that more funding is required – from taxation and from other sources such as public sector pension fund investment. This should be used to provide enough social housing, including council housing, at truly affordable rents to address the pressing demand for homes in Scotland now.