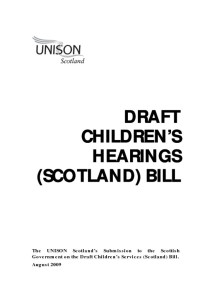 UNISON Scotland has serious concerns at the effects this Draft Bill would have on our members’ ability to protect children from harm and provide the service that the Children’s Hearing System currently offers.

Given the current climate with a high level of public concern about child protection the Scottish Government should be making systems safer, rather than removing some of the protections currently in place.

In fact the Bill fails to protect the welfare and child-centred principles of Scotland’s world-leading Children’s Hearing system.

UNISON recognises the issues arising from the European Convention on Human Rights and the fact that changes already made to the current system have been widely accepted as ‘ECHR-proof’. UNISON believes that the current checks and balances in the different roles and positive relationship between reporters and children’s panels work to the benefit of the welfare of children.

We are concerned that these legislative changes will force more and more children out of the hearing system into the court system, both on welfare and offence grounds, thereby wiping away a great deal of the innovative thinking and proven successes initiated by Kilbrandon….. https://unison-scotland.org/wp-content/uploads/childrenshearing.pdf