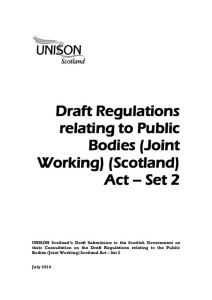 There appears to be total disregard for the Staff Governance Standard within the document and there was an expectation that the Regulations would state the Boards should be made up of equal partners from Health and Council and members nominated by both organisations would take up the voting seats. To ensure Staff Governance within Health is maintained, one of the voting seats would require to be held by a Staff Side member.

This existing wording would fundamentally see all Health Boards who currently work in a Partnership model agreed by the Scottish Government being put in jeopardy.

This is not how Health Staff Sides would want to embark on the new model for Health and Social Care Integration but we would be given no option as in their current format these regulations breach the Staff Governance Standard.

We believe the wording should include there being equal partners between Health and Councils with nominations of the Board Members made by either organisation. This would ensure both organisations’ existing working arrangements were recognised.