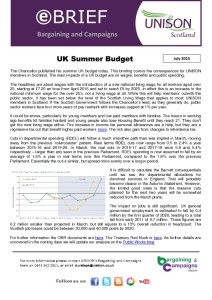 The Chancellor published his summer UK budget today. This briefing covers the consequences for UNISON members in Scotland. The main impacts of a UK budget are on wages, benefits and public spending.

The headlines are about wages with the introduction of a new national living wage for all workers aged over 25, starting at £7.20 an hour from April 2016 and set to reach £9 by 2020.

In effect this is an increase in the national minimum wage for the over 25’s, not a living wage at all.

While this will help members’ outwith the public sector, it has been set below the level of the Scottish Living Wage that applies to most UNISON members in Scotland.

If the Scottish Government follows the Chancellor’s lead, as they generally do, public sector workers face four more years of pay restraint with increases capped at 1% per year.