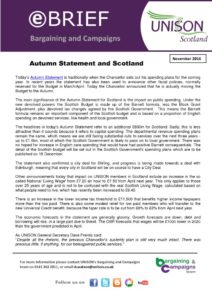 This briefing highlights the main implications of the UK Autumn Statement for UNISON members in Scotland.

While the £800m additional capital spending is welcome, there is nothing for revenue spending where the greatest pressures are in the Scottish budget.

The economic forecasts are almost all downgraded and that will also have longer term implications for public services.

Today’s Autumn Statement  is traditionally when the Chancellor sets out his spending plans for the coming year. In recent years the statement has also been used to announce other fiscal policies, normally reserved for the Budget in March/April. Today the Chancellor announced that he is actually moving the Budget to the Autumn.

The main significance of the Autumn Statement for Scotland is the impact on public spending. Under the new devolved powers the Scottish Budget is made up of the Barnett formula, less the Block Grant Adjustment, plus devolved tax changes agreed by the Scottish Government. This means the Barnett formula remains an important component of the Scottish budget and is based on a proportion of English spending on devolved services, like health and local government.

The headlines in today’s Autumn Statement refer to an additional £800m for Scotland. Sadly, this is less attractive than it sounds because it refers to capital spending. The departmental revenue spending plans remain the same, which means we are still facing substantial cuts to services over the next three years – up to £1.5bn, most of which the Scottish Government is likely to pass on to local government.

There was no hoped for increase in English care spending that would have had positive Barnett consequentials.

The detail of the Scottish budget will be set out in the Scottish Government’s spending plans which are to be published on 15 December.

The statement also confirmed a city deal for Stirling, and progress is being made towards a deal with Edinburgh, meaning that every city in Scotland will be on course to have a City Deal.

Other announcements today that impact on UNISON members in Scotland include an increase in the so called National ‘Living Wage’ from £7.20 an hour to £7.50 from April next year. This only applies to those over 25 years of age and is not to be confused with the real Scottish Living Wage, calculated based on what people need to live, which has recently been increased to £8.45.

There is an increase in the lower income tax threshold to £11,500 that benefits higher income taxpayers more than the low paid. There is also some modest relief for low paid members who will transfer to the new Universal Credit benefit, because the taper rate is to be cut from 65% to 63% from April next year.

The economic forecasts in the statement are generally gloomy. Growth forecasts are down, debt and borrowing will rise, in a large part due to Brexit. The OBR forecasts that wages will be £1000 lower in 2020 than the government predicted in April.

As UNISON General Secretary Dave Prentis said: “Despite all the rhetoric, the previous Chancellor’s austerity plan is still very much intact. There was precious little, if anything, for our beleaguered public services.”