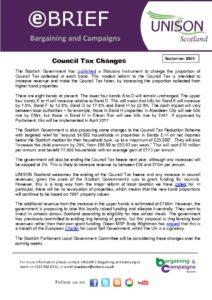 There are eight bands at present. The lower four bands A to D will remain unchanged. The upper four bands E to H will increase relative to Band D. This will mean that bills for Band E will increase by 7.5%, Band F by 12.5%, Band G by 17.5% and Band H by 22.5%. The cash impact will vary between local authorities – for example, those in Band H properties in Aberdeen City will see bills rise by £554, but those in Band H in Eilean Siar will see bills rise by £461. If approved by  Parliament, this will be implemented in April 2017.

The Scottish Government is also proposing some changes to the Council Tax Reduction Scheme with targeted relief for “around 54,000 households in properties in Bands E-H on net incomes below the Scottish median for their household type, up to a maximum of £25,000”. They will also “increase the child premium by 25%, from £66.90 to £83.63 per week.” This will cost £18 million per annum, and benefit 77,000 households with an average gain of £173 per annum.

The government will also be ending the Council Tax freeze next year, although any increases will be capped at 3%. This is likely to increase revenue by between £60 and £70m per annum.

UNISON Scotland welcomes the ending of the Council Tax freeze and any increase in council revenues, given the scale of the Scottish Government’s cuts to grant funding for councils. However, this is a long way from the major reform of local taxation we have called for. In particular, there will be no revaluation of properties, which means that the new band proportions  will continue to be based on 1991 property values.

The additional revenue from the increase in the upper bands is estimated at £100m. However, the government is proposing to take this locally raised funding and allocate it centrally. They want to invest in schools across Scotland according to eligibility for free school meals. The government has previously committed to ending ring fencing of grants, but this proposal is ring fencing local revenues rather than their own grant funding.

Green MSP Andy Wightman has argued that this is a breach of the European Charter for Local Self Government, which the UK is a signatory.

The Scottish Parliament Local Government Committee will be considering these changes over the coming weeks.