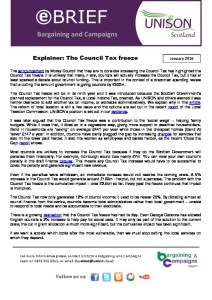 The announcement by Moray Council that they are to consider increasing the Council Tax has highlighted the Council Tax freeze. It is unlikely that many, if any, councils will actually increase the Council Tax, but it has at least sparked a debate about council funding. This is important in the context of a draconian spending review that is cutting the amount government is giving councils by £500m.

The Council Tax freeze will be in its ninth year and it was introduced because the Scottish Government’s planned replacement for the Council Tax, a Local Income Tax, crashed. As UNISON and others warned it was neither desirable to add another tax on income, or workable administratively. We explain why in this article. The reform of local taxation is still a live issue and the options are set out in the recent report of the Local Taxation Commission. UNISON’s position is set out in our evidence.

It was later argued that the Council Tax freeze was a contribution to the ‘social wage’ – helping family budgets. While it does that, it does so in a regressive way, giving more support to wealthier householders. Band H households are “saving” on average £441 per year while those in the cheapest homes (Band A) “save” £147 a year. In addition, councils have partly plugged the gap by increasing charges for services that also hit the lower paid harder. It also hits women as employees and carers harder, as the recent ‘Close the Gap’ report shows.
Most councils are unlikely to increase the Council Tax because if they do the Scottish Government will penalise them financially. For example, Edinburgh would lose nearly £7m. You can view your own council’s penalty in the draft finance circular. This means any Council Tax increase would have to be substantial to cover the penalty and generate significant new revenue.

Even if the penalties were withdrawn, an immediate increase would not resolve the coming crisis. A 5% increase in the Council Tax would generate around £100m – helpful, but not a panacea. The problem with the Council Tax freeze is the cumulative impact – over £2.5bn so far. Every year the freeze continues that impact is multiplied.

The Council Tax now only generates 12% of council income; it used to be nearer 20%. By dictating almost all council finance from the centre, councils become local administrators rather than local government – unable to respond to local needs and be accountable to their electorate.

There is a growing realisation that the Council Tax freeze has had its day. Even George Osborne has allowed English councils a 2% increase to help pay for social care. It may only be part of the solution to the current crisis, the cut in grant allocation is much more significant, but the cumulative impact has been significant.

If we want a society which looks after the most vulnerable, then we must stop cutting the local services on which they depend.