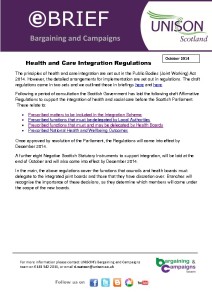 The principles of health and care integration are set out in the Public Bodies (Joint Working) Act 2014. However, the detailed arrangements for implementation are set out in regulations. The draft regulations came in two sets and we outlined these in briefings here and here.
Following a period of consultation the Scottish Government has laid the following draft Affirmative Regulations to support the integration of health and social care before the Scottish Parliament.  These relate to:
Prescribed matters to be included in the Integration Scheme  Prescribed functions that must be delegated by Local Authorities
Prescribed functions that must and may be delegated by Health Boards
Prescribed National Health and Wellbeing Outcomes
Once approved by resolution of the Parliament, the Regulations will come into effect by December 2014.