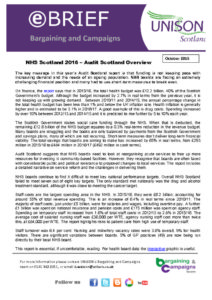 The key message in this year’s Audit Scotland report is that funding is not keeping pace with increasing demand and the needs of an ageing population. NHS boards are facing an extremely challenging financial position and many had to use short-term measures to break even.

The Scottish Government routes social care funding through the NHS. When that is deducted, the remaining £12.6 billion of the NHS budget equates to a 0.3% real-terms reduction in the revenue budget.

Many boards are struggling and the books are only balanced by payments from the Scottish Government and savings plans, many of which are not recurring. Short-term measures don’t deliver long-term financial viability. The total savings that boards are aiming to make has increased by 65% in real terms, from £293 million in 2015/16 to £484 million in 2016/17 (£492 million in cash terms).

Audit Scotland suggests that NHS boards need to look at reorganising acute services to free up more resources for investing in community-based facilities. However, they recognise that boards are often faced with considerable public and political resistance to proposed changes to local services. The report includes
a detailed narrative on service reform and the challenges in delivering them.

NHS boards continue to find it difficult to meet key national performance targets. Overall NHS Scotland failed to meet seven out of eight key targets. The only standard met nationally was the drug and alcohol treatment standard, although it was close to meeting the cancer target.

Staff costs are the largest spending area in the NHS. In 2015/16, they were £6.2 billion, accounting for around 55% of total revenue spending. This is an increase of 6.4% in real terms since 2010/11. The majority of staff costs, just under £5 billion, were for salaries and wages, including overtime pay. A further £1 billion was spent on national insurance and pension costs and £175 million was spent on agency staff.

Staff turnover was 6.4 per cent. Nursing and midwifery vacancy rates were 3.6% overall, 9% for health visitors. There are significant variations between boards. 5% of GP practices (49) are now being run directly by their local NHS board.

This report is essential, if uncomfortable, reading. For health board data the interactive graphic is useful.