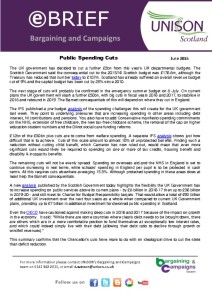 The UK government has decided to cut a further £3bn from this year’s UK departmental budgets. The Scottish Government said the consequential cut to the 2015/16 Scottish budget was £176.8m, although the Treasury has reduced that number today to £107m. Scotland has already suffered an overall revenue budget cut of 9% and the capital budget has been cut by 25% since 2010.
The next stage of cuts will probably be confirmed in the emergency summer budget on 8 July. On current plans the UK government will slash a further £30bn, with big cuts in fiscal years 2016 and 2017, to stabilise in 2018 and rebound in 2019. The Barnett consequentials of this will depend on where they cut in England.