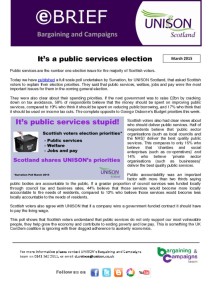 Public services are the number one election issue for the majority of Scottish voters.  Today we have published a full scale poll undertaken by Survation, for UNISON Scotland, that asked Scottish voters to explain their election priorities. They said that public services, welfare, jobs and pay were the most important issues for them in the coming general election.
They were also clear about their spending priorities. If the next government was to raise £2bn by cracking down on tax avoidance, 58% of respondents believe that the money should be spent on improving public services, compared to 19% who think it should be spent on reducing public borrowing, and 17% who think that it should be used on income tax cuts. The complete opposite to George Osborne’s Budget priorities this week.