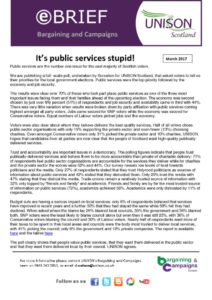 Public services are the number one issue for the vast majority of Scottish voters.

We are publishing a full-scale poll, undertaken by Survation for UNISON Scotland, that asked voters to tell us their priorities for the local government elections. Public services were the top priority followed by the economy and job security.

The results were clear over 70% of those who took part place public services as one of the three most important issues facing them and their families ahead of the upcoming election. The economy was second chosen by just over fifty percent (51%) of respondents and job security and availability came in third with 44%. There was very little variation when results were broken down by party affiliation with public services coming highest amongst all party voters. Jobs came second for SNP voters while the economy was second for Conservative voters. Equal numbers of Labour voters picked jobs and the economy.

Voters were also clear about whom they believe delivers the best quality services. Half of all voters chose public sector organisations with only 19% supporting the private sector and even fewer (13%) choosing charities. Even amongst Conservative voters only 31% picked the private sector and 10% charities.Scottish citizens value public services, they want them delivered in the public sector and  they want them delivered local by their council. UNISON agrees.

UNISON hopes that candidates from all parties are now clear that the people of Scotland want high-quality publicly-delivered services.