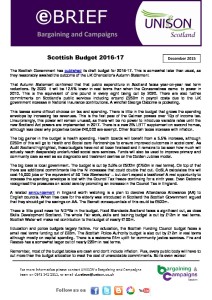 The Scottish Government has published its draft budget for 2016-17. This is somewhat later than usual, as they reasonably awaited the outcome of the UK Chancellor’s Autumn Statement.

…The big loser is local government. The budget is cut by 3.5% or £500m (£750m in real terms). On top of that there are additional commitments like the NI increases that could double that cut. CoSLA calculates this will cost 15,000 jobs or ‘the equivalent of 50 Tata Steelworks’ – but don’t expect a taskforce! A real opportunity to increase the spending envelope is lost with the Council Tax freeze continuing for a ninth year. Even Osborne recognised the pressures on social care by promoting an increase in the Council Tax in England.