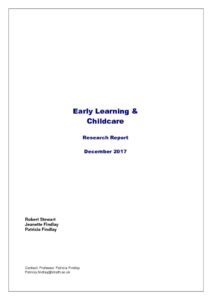 UNISON Scotland commissioned an independent assessment of the contribution made by Early Learning and Childcare (ELC) staff to childcare and education services in Scotland. The research constructively informs the work of UNISON Scotland in promoting the role, contribution and interests of Early Years Workers (ELWs) in the context of any upcoming expandion of early years childcare.

Key findings from the UNISON-commissioned report, conducted by Strathclyde University, include:

**  More than three quarters of early years workers (EYWs) agreed that EYWs and teachers in early learning and childcare carried out largely the same tasks, with 79% either strongly agreeing or agreeing that teachers and EYWs made equivalent contributions to child development and 78% reporting both groups did largely the same set of tasks

** While educational research has consistently highlighted the importance of GTCS-registered teachers in nursery education, there is little evidence that the quality of services has diminished in Scotland as the presence of teachers has declined. Instead, CI inspection reports present a clear picture of an ELC workforce comprising teaching and early years professionals delivering high quality services. This persists where teacher management is not present.

**The majority of EYWs agreed they had sufficient time to reflect on the progress of children (81%); sufficient autonomy to make decisions about how best to support children (73%); that they received sufficient training (62%) and that they were happy about the quality of provision in their establishment (56%).

**Most survey respondents had concerns about the extension of entitlement to 1,140 hours including: additional administrative and working pressures on staff (25%); the pressures on children coping with long days and loss of family attachment time (21%); the potential reduction of EYWs to ‘childcare’ roles due to less time to emphasise learning if staff resources not increased accordingly; and diminished quality of service and standards (18%).