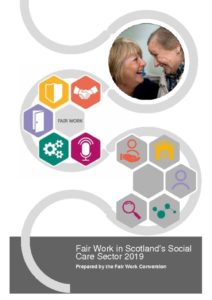 The report is an 18-month study  and it concluded that more than 200,000 people worked in social care in Scotland – 7.7% of the workforce –  82% of them women. The figure, from Scotland’s social services regulator, includes occupations such as home care workers, residential carers, social workers, nurses and childcare staff.

This report makes recommendations about how to realise fair work for social care workers by setting out what policy makers, commissioners and leaders in Scotland’s social care sector can and should do.

Lilian Macer said: ” I am very proud to co-chair the Fair Work Convention Inquiry into Social Care in Scotland. The report, launched today with clear recommendation to improve the working lives for many low paid women workers.

We found what UNISON already knew, that we have a dedicated workforce of around 200,000 mostly women in precarious contracts in sector in which they have little power or influence. Women told us they enjoy being involved in people’s lives and like that they make a positive difference. However Society needs to value social care as a profession.

There is considerable use of zero hours contracts, underemployment and seasonal contracts. This reports calls on the Scottish Government to take urgent action to bring about a radical overhaul of social care and to use fair work principles to drive high quality services for some of our most vulnerable people.”

You can find out more about the work of the Fair Work Convention at their website:
www.fairworkconvention.scot

The Fair Work Convention said staff frequently worked beyond contracted hours and did unpaid overtime. The convention, which advises the Scottish government, called for a watchdog to monitor working conditions and draft a “fair work” contract.

Scottish Care, which represents care providers, said too many authorities purchased services “on the cheap”.

The Scottish government said it agreed that enhancing fair work was crucial to a future social care workforce, and was publishing an action plan.

However, the Fair Work study found many of them were on zero hours contracts and expected to work excessive hours. The report said employers complained that it was hard to offer better employment conditions because of problems with funding or commissioning.