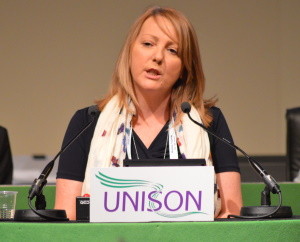 UNISON vowed to put pressure on UK, Indian and US governments to get justice for Bhopal, and to get the Indian Government to ensure adequate healthcare, employment opportunities and pensions for those affected.

Lilian Macer, Scottish Regional Representative, slammed the continued failure of Union Carbide and its 100% owner Dow Chemicals to clean up after the disaster.

“It is an absolute disgrace that upwards of 100,000 people in the city are still seriously ill and the drinking water of a further 20,000 has been poisoned by chemicals leaking from the abandoned plant. There should be no hiding place for the criminals that caused this disaster.”

Lilian described the unimaginable horror on the night. “Shortly after midnight on 3 December 1984 poison gas leaked from a factory in Bhopal, India, owned by the Union Carbide Corporation. There was no warning.

“None of the plant’s safety systems were working. In the city, people woke in darkness to screams with gases burning their eyes and lungs.

“Whole neighbourhoods fled in panic. Many people were trampled, others convulsed and fell dead. People lost control of their bladders and bowels as they ran. Within hours thousands of dead bodies lay in the streets.”

Lilian called for working people across the world to bring pressure to bear, “that will after 30 years bring justice to the hundreds of thousand affected, generations of working class people, communities struggling while the multi-nationals get rich by mass murder and maiming generations of poor people.”

“Dow Chemicals need to take responsibility and liability for this disaster and if we don’t ensure they do this appalling situation will happen again by them or the multinational companies who hide behind corporate law that uses and abuses poor communities across the world.”

As a health worker, she urged, every branch of UNISON to support the work undertaken by Bhopal Medical Appeal.

Last December Sam MaCartney and Scott Donohoe, Glasgow City and Tony Caleary, Stirling, took part in an STUC delegation to India to be with the people of Bhopal on the thirtieth anniversary.

They were stunned when they realised first-hand the real impact that this catastrophe had had on the people of the city. Sam described “A city where the infrastructure has broken down and poverty is rife and can be seen on every corner, the sights, sounds and smells will live with me for the rest of my life.”

At the same time, Sam was astonished by the kindness they received and the courage they saw. “These people who have little or nothing, shared their joy, their grief, and their stories.

“We witnessed their ongoing struggle for justice, retribution and compensation after thirty long years of struggle, a struggle that has seen their government ignore them and a justice system that has failed to represent them, and an American government, who has failed to bring then company that caused this disaster to justice and accountability. But this wasn’t a disaster, this was corporate killing – murder!”

He explained Dow Chemicals still deny all responsibility and still deny the people of Bhopal their rightful justice and that adjudicated compensation at the time by the International Labour Organisation just shows the inequality in the value of human life between the North and the South of this world and how little the lost lives were worth to their own government and to corporate America.

Sam said, “The Indian trade unions said that the Bhopal gas tragedy should serve as a warning to our government, yet our government is once again, selling our labour force to global corporations and has in fact amended the Factories Act allowing these companies to self-regulate and control all aspects of health and safety.”

Encouraging branches to sign up to this very worthy campaign, Sam said, “The people of Bhopal deserve our support, after thirty years of being ignored by the world in their fight for justice, compensation and recognition is long overdue”