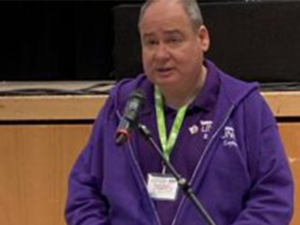 It included a call from UNISON Scotland for governments at all levels to take seriously their responsibilities to fund public services and deliver a fair wage for those who provide them, through local taxation which limit opportunities for avoidance and evasion..

Moving the motion, UNISON Scotland’s Mark Ferguson told delegates that our broken tax system needs to fundamentally change, describing it as “not fit for working people but perhaps, not surprisingly, suits the millionaires and billionaires Tory chums.

“The issue of legal and illegal tax avoidance and evasion are long standing in the UK.  But the danger is that it appears to be normalised, as sort of well what do you expect?” warned Mark.

“Well we expect and demand a more transparent and fairer system, in order that the appropriate tax income can be gathered and pay for public services which have been starved of proper investment for too long.”

Mark added: “This shouldn’t just be for national taxation but for local taxation.  The long needed overhaul of the Council Tax and the ability to introduce new local tax raising initiatives like Tourist Taxes would bring some much needed increased funding into Local Government.”

Mark added that with the backdrop of Covid recovery and the Cost of Living Crisis, the demand for public services is increasing monumentally.

“Our public services help the health and well being of people in our communities across Scotland.  From education, leisure, social work, libraries, housing – to name check just a few.  However these services need to be properly funded in order that the services are fit for purpose.”

Mark pointed to the impact of the recruitment crisis in so many areas including Social Care and the NHS is in part due to the poor levels of pay, overwork and undervalue.  He warned that workers need inflation proof wages to ensure that they cannot just survive but thrive.  “UNISON has long argued that if you pay workers more and it is a treble win.  It lifts families out of poverty, we spend in our local economies in the very areas – Retail, Hospitality and Leisure – in all its forms that need income to survive.

“That in turn creates more jobs in the private sector and more workers paying tax.  Unlike the super wealthy elite, we spend, no offshore accounts, no investment in cryptocurrency.  Back into the local economies.

Referencing UNISON’s Local Government Manifesto – Democracy, Fairness and Recovery, he said that we should expect first class services with fairly rewarded pay levels for doing so.

“For demand the economy to be sustained we need to put money in people’s pockets by increasing wages.  We need a tax system that is fair and generates the tax revenues that are needed to properly fund public services.