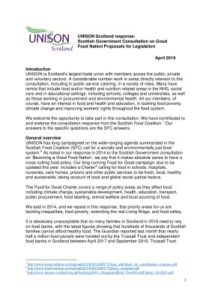 UNISON has long campaigned on the wide-ranging agenda summarised in the Scottish Food Coalition (SFC) call for a socially and environmentally just food system [1] and we support the SFC response to this consultation.

As noted in our response in 2014 to the Scottish Government consultation on ‘Becoming a Good Food Nation’, we say that it makes absolute sense to have a cross cutting food policy.

Our long-running Food for Good campaign, due to be updated this year, includes a Charter[2] calling for food in schools, hospitals, nurseries, care homes, prisons and other public services to be fresh, local, healthy and sustainable, taking account of local and global social justice factors.

We said in 2014, and we repeat in this response, that priority areas for us are tackling inequalities, food poverty, extending the real Living Wage, and food safety.

It is absolutely unacceptable that so many families in Scotland in 2019 need to rely on food banks, with the latest figures showing that hundreds of thousands of Scottish families cannot afford healthy food. The Guardian reported last month that nearly half a million food parcels were handed out by the Trussell Trust and independent food banks in Scotland between April 2017 and September 2018. Trussell Trust figures showed a 15% increase in food bank use year on year “linked directly to the rollout of Universal Credit.”[3]

Even before such shocking increases in food poverty, we argued for universal free school meals and again we repeat that call. Hungry children cannot learn well, with impacts on health, on education and on their life chances. Policy has to be cross cutting to ensure joined up thinking and strategies. Economic policy and social security policy are clearly integral to our ambitions on food issues across the spectrum. Austerity declares deliberate, cruel, targeted economic war on the most vulnerable, with, at the extreme, appalling cases of people denied benefits going so hungry they are quite literally starving.

Austerity cuts to public services lead to cuts to funding for school meals, for hospital food, for environmental health inspections (with consequent impacts on food safety), and for services to support vulnerable people.

We will not labour this point in our response, nor detail the mountains of evidence of the damage being done, but it is our experience of and knowledge of these shameful developments in one of the world’s richest countries that inform our demands for a socially and environmentally just food system.

We believe that achieving the Good Food Nation vision, including that everyone in Scotland has ready access to the healthy, nutritious food that they need, has to incorporate the measures on pay and collective bargaining proposed by the Scottish Food Coalition. This means a robust target on the face of the Bill for all workers in the food sector to be paid at least the living wage and included in collective bargaining agreements by 2025 at the latest. Food sector jobs are often some of the most insecure and poorly paid. Any Good Food Nation ambitions must have a strategy to address this and we support the detailed response on this from our sister union Unite, also a member of the SFC ….

We support the SFC priorities for Good Food Nation legislation. These are:

2. A requirement for a comprehensive National Food Plan, which covers the full spectrum of issues related to food, from farm to fork to waste;

3. Robust targets on the face of the bill, including:

a) All workers in the food sector paid at least the living wage and included in collective bargaining agreements by 2025 at the latest.

b) Halving of moderate to severe household food insecurity by 2030

d) Halving the environmental impact of the food system, including halving food waste by 2030

4. Duties on public bodies; and,

5. Legislating for an independent food commission, with the power and resources to commission research, and oversee policy coherence and progress towards food system goals.

Read our full response by clicking on the image of it above.