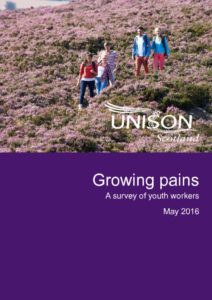 This survey is part of UNISON Scotland’s Damage series: a set of surveys looking at the impact of the ‘Age of Austerity’ on services and those who deliver them.

The Conservative Government’s Austerity programme will result in a further £2billion of cuts to Scotland’s public services. Sadly the cuts that services have already endured, since the banking crisis, are having a serious impact on public bodies’ ability to deliver high quality services.

This survey focuses on the impact of the Age of Austerity on members who are employed to do youth work. Respondents worked across a range of local authorities in Scotland in varied roles covering a wide range of activities undertaken to support young people across Scotland. Their work aims to support young people to achieve their full potential through developing specific skills and self esteem, self confidence and resilience.

Earlier this year Angela Constance, Cabinet Secretary for Education and Lifelong Learning1 welcomed research valuing youth work at £656m, with a return of £7 for every £1 spent2. Sadly these warm words have not been accompanied by appropriate funding to continue to deliver such a valuable service. The responses to our survey show that funding is being cut and these cuts are having a detrimental effect of services, and our members who are struggling to deliver with limited resources. Budget cuts impact not only on young people in the short and long term but also on the wider community and, as the YouthLink report shows, our economy.

Respondents worked across a range of local authorities in Scotland in varied roles including:

79% of those who responded stated that there had been cuts or severe cuts to their team budgets this year, 82% said the same about “last year” and 83% said cuts or severe cuts over the last five years. Comments left in response to this question indicate that the budget cuts have led to job cuts and to vacancy freezing. Members also stated that the cuts were impacting on the level and standard of the services they were trying to deliver. Provision in some places is increasingly reliant on volunteers, some workers were even spending their own money to enable some activities to continue.

Members were then asked more specifically about the impact of any budget cuts on jobs. While as is often the case in local government redundancy numbers are not at the levels which attract headlines, most indicated that one or two members of staff had been made redundant. Some have though seen job cuts as high as 11 but losing even one member of staff from a small team has a substantial impact on the ability to maintain service levels.

Over 70% of those who took part in our survey have seen an increase in their workloads in the last few years. Respondents indicated that it was not just that the amount of work that had changed although that was the case, with most experiencing much higher workloads than in the past. The nature of the work has also changed with many now expected to take on work that had previously been done by more senior staff. Others have seen their role widened taking on work out with their previous remit.

Despite Scottish Government/Christie Commission talking about moving to a preventative model for the last five years respondents felt that preventative work was not being prioritised. Other comments highlight the impact of budget cuts which mean that activities can no longer go ahead. Not only does this mean young people lose out on the activity but the processes whereby they are involved in decision making are undermined. In some cases taking part in the planning and deciding are actually more important to reaching outcomes than the activity itself.

As in our previous reports cuts are leading to many working unpaid hours to ensure that service users’ needs are met. Over 40% of respondents indicated that they work extra unpaid hours frequently/most weeks while another 32% said they did so now and again. Members indicate that they do this because they want to try and maintain service provision despite the cuts.

Members are feeling anxious, undervalued and stressed. Over 70% describe morale in their teams as low or very low, with 14% saying it’s fine and only 12% describing morale as good. No one said morale is very good. This is work that is very people focused, you cannot, in the long term, deliver a high quality personal service with such low morale.

The reasons given are concerns about the future of their jobs because of the cuts, the difficulties of dealing with constant change, lack of communication and poor management and lack of respect and low wages. Many feel that the passion and commitment that brought them into youth work is not valued and they feel that commitment slipping away. Where people do feel better it is about the support that they get from their team members.

As we continue to gather information from our members about the impact of budgets on their ability to do their jobs we see more and more just how severe the situation is becoming.

The responses to our youth workers’ survey show that funding is being cut and these cuts are having a detrimental effect of services. Our members who are struggling to deliver with limited resources. This will impact not only on the young people in the short and long term but also on the wider community and our economy.

Demand for youth services is not falling. We cannot pretend the cuts are not hurting.