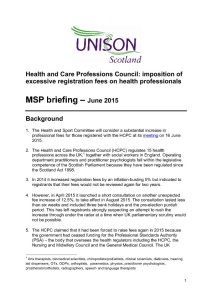 
The Scottish Parliament Health and Sport Committee will consider a substantial increase in professional fees for those registered with the HCPC at its meeting on 16 June 2015.

Coming hot on the heels of the 5% rise the HCPC implemented from April 2014, UNISON believes that an unexpected 12.5% increase is unacceptable at a time when HCPC registrants have suffered five years of pay freezes/pay restraint, and attacks on terms and conditions. Many registrants are suffering high levels of debt and struggling to make ends meet. They were told by HCPC there would be no fee review until 2016 and they believe that HCPC should exercise restraint and sensitivity at this time.

On behalf of registrants in the 16 affected health and social care professions, UNISON would be grateful for the support of MSPs in opposing this subordinate legislation. While there are a limited number of professions regulated in Scotland, it would send an important message to HCPC that they should have greater regard to affordability in these difficult times.