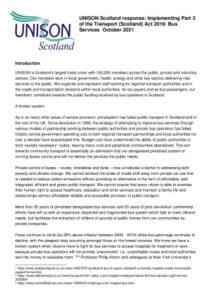 UNISON believes we deserve a world class bus system. But we will only get this by rejecting deregulation and privatisation and taking a radically different approach to how we provide bus services. The Transport (Scotland) Act 2019 is a flawed piece of legislation but it does provide the option of publicly delivered bus services, an option which remains unlawful in England.

The Scottish Government must provide regional transport authorities with centrally provided resources, expertise and capital to enable them to take up this option. The most effective route towards local transport authority bus services will involve collaboration between local authorities and transport partnerships in different parts of Scotland and is likely to build upon the existing model of Lothian Buses, one of the most successful publicly owned bus companies in the UK.

UNISON views the public provision of bus services as the ‘transport arm’ of Community Wealth Building.  Lothian Buses exemplifies a Community Wealth Building approach to local transport provision. Its public ownership model enables its operating surplus to be reinvested in local services rather than being extracted and the benefit lost to the local community.  Given the Scottish Government’s support for Community Wealth Building – to be progressed through legislation in this parliament – one option is for the central team dedicated to helping LTAs develop publicly owned bus companies, to be part of – or linked with – the CWB team inside Scottish Government – as an alternative to Transport Scotland. There is plenty for a central team to work on.  It should work with the Scottish National Investment Bank to consider its role in the provision of needed start up capital. It should proactively develop plans to enable public sector agencies to act quickly should major operators decide to withdraw from the Scottish bus market, as First Bus announced its intention to do in 2019 (later reversed).