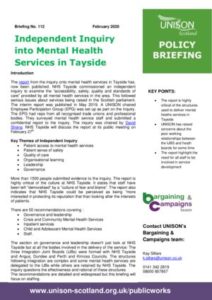 The report from the inquiry onto mental health services in Tayside has now been published. This followed serious issues about services being raised in the Scottish parliament. A UNISON chaired Employee Participation Group (EPG) was set up as part of the inquiry. The EPG had reps from all recognised trade unions and professional bodies. The inquiry was chaired by David Strang. NHS Tayside will discuss the report at its public meeting on February 27th.

UNISON is deeply concerned about the content of this report. Over the last few years we have raised many of the issues which are highlighted in the report. For example, last year (October 2019) we asked for the Mental Health Strategy to be put on hold. In particular we had serious concerns that patients were being transported a long way from their family for treatment.

UNISON also raised the fact that there was a poor working relationship between Joint Integrated Boards and the Health Boards. This is impeding the roll out of the mental health strategy. UNISON highlighted the issues caused by the culture of bullying which has been allowed to continue. This has been a serious concern to our members.

UNISON is organising meetings with members in Tayside. But all branches will want to read and discuss the implications in this report and what we need to do over the long term to protect staff and service users