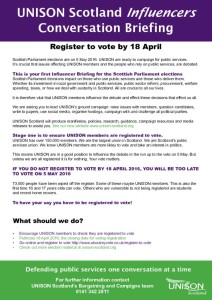 Scottish Parliament elections are on 5 May 2016. UNISON are ready to campaign for public services.

It’s crucial that the issues affecting UNISON members and the people who rely on public services are debated.

Scottish Parliament decisions impact on those who use public services and those who deliver them. Whether its investment in local government and public services, public sector reform, procurement, welfare spending, taxes, and how we deal with austerity in Scotland are crucial to all our lives.

It is vital that UNISON members influence the debate.

As influencers we are asking you to lead UNISON ground campaign. Speak to members, raise key issues, question parliamentary candidates, write to papers, use the media, organise hustings, challenge and campaign within political parties.

UNISON Scotland will publish resources to assist you on this website. We will produce manifestos, policy, research, guidance, campaign resources and media releases.

The first Stage in our campaign is to ensure UNISON members are registered to vote.

UNISON has over 150,000 members. We are the largest union in Scotland. We are the public services UNION. We know UNISON members tend to vote, and take an interest in politics.

This means UNISON are in a good position to influence the debate in the run up to the vote in May. But unless we are all registered it is all for nothing.

73,000 people have been wiped off the register. Some of these maybe UNISON members. This is also the first time 16 and 17 years olds can vote. Others who are vulnerable to not being registered are students and recent home movers.

To have your say you have to be registered to vote!