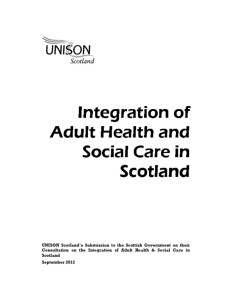 UNISON Scotland members have been involved in various proposals for the integration of health and care services since the late1990s when Local Health Care Co-operatives were first launched, followed by the Joint Future initiative through to the NHS Reform (Scotland) Act (2004) which established Community Health Partnerships (CHPs).

Despite all the policy and legislative developments joint working has not worked well in all parts of the country, although there are many examples of excellent service improvement across Scotland. However, the new emphasis on demographic change is now driving further initiatives to meet the increased demand and costs that an ageing population may need. In its recent response to the call for written evidence to the Scottish Parliament’s Health and Sport Committee on Demographic Change and the Ageing Population,  UNISON advised caution over the projections, as there is some evidence that while the population is getting older, it is also getting healthier.  Inward immigration is also rebalancing the age ratio of Scotland and the rest of the UK.

Recent developments have included Reshaping Care for Older People (2011) which provided Change Fund monies to introduce innovative plans for increased preventative and personalised services with support in community settings rather than acute hospitals and which included housing and leisure services. In addition, the Christie Commission (2011) recommended greater integration of health and social care in its review of the delivery of future public services, although it did not support top down structural changes, but expressed a preference for local initiatives…