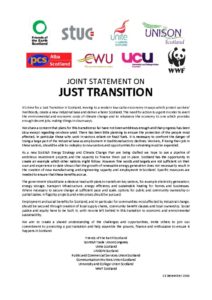 UNISON Scotland is one of the trade union partners which has signed a joint statement with environment campaigns FoE Scotland and WWF Scotland to develop policies that can create a Just Transition to a Low Carbon Economy.

The Statement notes our shared concern that plans to tackle climate change have been too slow and not ambitious enough, and presses the Scottish Government for bold measures, particularly in the Climate Plan, the new Energy Strategy and the new Climate Bill.

The Joint Statement is open to unions and civil society organisations to sign up and support.

It’s time for a Just Transition in Scotland, moving to a modern low carbon economy in ways which protect workers’ livelihoods, create a new industrial base and deliver a fairer Scotland. The need for action is urgent in order to avert the environmental and economic costs of climate change and to rebalance the economy to one which provides enough decent jobs making things in clean ways.

We share a concern that plans for this transition so far have not been ambitious enough and that progress has been slow except regarding onshore wind. There has been little planning to ensure the protection of the people most affected, in particular those who work in sectors reliant on fossil fuels. It is necessary to confront the danger of losing a large part of the industrial base as employment in traditional sectors declines. Workers, if losing their job in these sectors, should be able to redeploy to new sectors and opportunities for retraining must be expanded.

As a new Scottish Energy Strategy and Climate Change Plan are being drafted we hope to see a pipeline of ambitious investment projects and the capacity to finance them put in place. Scotland has the opportunity to create an example which other nations might follow. However fine words and targets are not sufficient on their own and experience to date shows that the growth of renewable energy generation does not necessarily result in the creation of new manufacturing and engineering capacity and employment in Scotland. Specific measures are needed to ensure that these benefits accrue.

The government should take a decisive lead with plans to transform key sectors, for example electricity generation, energy storage, transport infrastructure, energy efficiency and sustainable heating for homes and businesses. Where necessary to secure change at sufficient pace and scale, options for public and community ownership or partial stakes in flagship projects and enterprises should be pursued.

Employment and social benefits for Scotland, and in particular for communities most affected by industrial change, should be secured through creation of local supply chains, community benefit clauses and local ownership. Social justice and equity have to be built in, with no-one left behind in this transition to economic and environmental sustainability.

We aim to create a shared understanding of the challenges and opportunities, invite others to join our commitment to promoting a just transition and help assemble the powers, finance and enthusiasm to ensure it happens in Scotland.