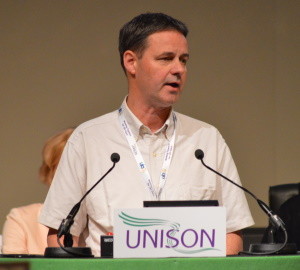 UNISON reaffirmed its support for the Palestinian people and for a free Palestinian state and will step up our contribution to the campaign for Boycott, Divestment and Sanctions (BDS).

This comes on the back of Israel’s terrible assault on Gaza last summer and delegates condemned the lack of meaningful response by the British Government, the EU and the UN to the targeting of civilians during that conflict, which is prohibited by International law.

Supporting the motion, Scottish Regional Delegate Stephen Smellie reminded us that UNISON has contributed greatly to the Palestinian cause over the years, nationally through the efforts of regions and branches.

He said, “We should not underestimate the influence trade unions can have in building support internationally through building alliances, focussing lobbying and through taking actions to bring attention to the need for governments and companies to take steps to stop colluding with the abuse of people.

He reminded us that there is still much to do as the result of the Israeli election and the statements by Netanyahu underlines.

“However our position is that we, UNISON, recognise the Palestinian state and we should act on this.

“When they are denied these rights or abused here in our backyard, in our Universities, in our pension schemes or in our public sector procurement procedure then we not only protest we have to take action.”

Now that we are involved in the governance of pension funds Stephen called for us to challenge investments in companies who invest in Israeli security systems and demand they divest. We should also expose local authorities who contract with Israeli companies and demand that they end this.

“And when our activists and branches are then challenged either in terms of their employment or legally or as in some cases through personal threats, this union should stand by them and citing international law defend them and their actions,” urged Stephen.

Glasgow City’s Sam Macartney, Chair of the Scottish International Committee, called for a two way military embargo on Israel as part of a campaign of BDS, as “a crucial step towards ending Israel’s criminal use of force against the Palestinian peoples and other peoples and and states in the region.” It is also an effective measure to pressure Israel to comply with its obligations under international law.

Sam read out a call for action working in partnership across Scottish civil society and beyond, to campaign to highlighting the continuing complicity of our governments and corporations in Israel’s project of ethnic cleansing, colonisation, apartheid and occupation and to end the arms trade between Israel and companies based in Scotland that are direct suppliers of technology, weapons and components used to oppress, maim and kill Palestinians.

“We must also divest local authority and public sector pension funds of investments in arms companies and pressure the government to take immediate steps to implement a comprehensive and legally binding military embargo on Israel,” said Sam.